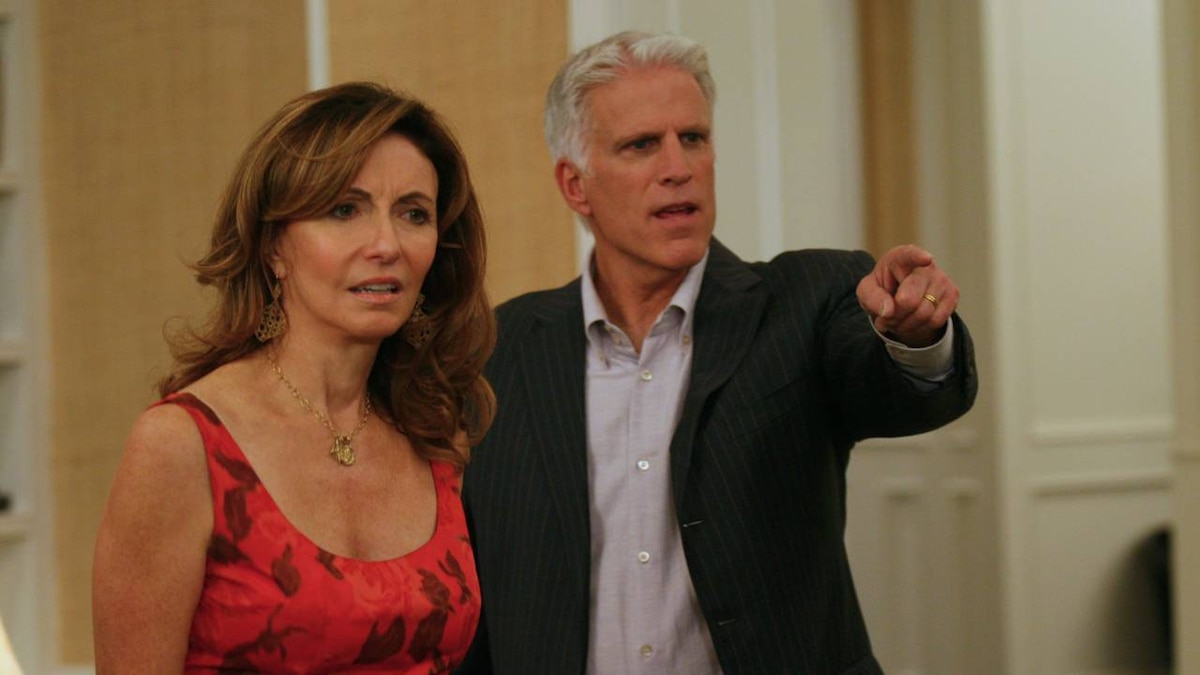 Larry is leafing through the Freak Book (1), his gift for Ted, while he waits for Cheryl to get ready for Ted's birthday party. Cheryl updates Larry with good news: they secured their cemetery plots so they will be buried beside Ted and Mary and Jeff and Susie. Larry has to put the book aside when their driver (2) Charlie arrives to take them to the party.

When they arrive at the party, Larry is concerned that Charlie will be bored waiting, but Charlie insists he'll be fine: it's his job to wait. Inside, Larry strikes up a conversation with the bartender who is wearing a bow tie (3). When he finds out that Ted requested the bow tie, Larry insists on talking to Ted to get him to change his mind, in spite of the bartender's pleas that he not say anything. "You don't understand how I operate," insists Larry.

Ted defends the bow tie choice to Larry, insisting it classes up the party. Larry badgers him but Ted won't give in, so Larry changes course and asks that he be able to invite his driver inside to the party so he doesn't have to wait alone in the car (4). Ted would rather send coffee out, but finally acquiesces. Later, opening his gifts, Ted is unimpressed with the Freak Book, and Larry snatches it away to show Jeff. As the two of them laugh loudly over the photos, Charlie the driver stumbles into the room, plastered. When Mary runs in, shouting that Charlie groped her, Ted kicks him out, and throws Larry and his Freak Book out after him.

With Charlie too drunk to drive, Larry and Cheryl drive him home to a depressing house where his wheelchair-bound wife greets them screaming at the door -- with her aging father shouting in the background. Larry is disturbed by their sad lives, but begs to borrow the limo until the next day so he and Cheryl can get home.

The next night, getting ready to go to the Paul McCartney concert, Larry tells Cheryl he no longer wants to be buried next to Ted after he kicked him out last night, and insists that she swap places with him. Cheryl is amenable, but warns he must clear it with Susie, who Larry will be next to if they switch. When Jeff and Susie arrive to go to the concert with them, Larry kisses up to Susie (5). But when he raises a toast to friendship and announces he's trading places with Cheryl, Susie balks (6). Furious no one will switch places, Larry storms out, taking the limo: "If you don't want to be buried next to me when you're dead, I can assume you don't want to be next to me when you're alive!"

In the limo, Larry gets a call from a hungover Charlie who needs a big favor. He's late to pick up at VIP client at the airport and needs Larry to cover for him. Larry resists but Charlie wears him down. It turns out the VIP Is John McEnroe who is headed to the McCartney concert. As he drives, Larry won't stop talking, firing away questions about being shy (7), ping pong (8), gardening (9) and the frequency of married sex (10), much to McEnroe's dismay.

Driving by the cemetery, Larry insists on making a stop for just couple of minutes. He urges McEnroe to read the Freak Book (which Larry left in the limo) while he waits. Larry ends up purchasing a second plot, away from his group; he'll have to sell his plot himself, they don't take returns. Impatient, McEnroe gets out to look for Larry and an Italian family climbs into the limo, thinking it's theirs. When Larry returns, he can't get the grieving family out of the limo. The family insists he drive them home and Larry orders McEnroe into the back with them. When Larry gets lost and the mayhem in the limo escalates, a fed-up McEnroe insists Larry pull over and ejects the family. They continue on to the concert and Larry talks McEnroe into taking him to the VIP pre-party - along with the Freak Book, which McEnroe loves.

At the pre-party, as Larry and McEnroe get drunk their enthusiasm for the Freak Book gets louder and the crowd quiets just in time to hear them shouting "What a freak!" the moment Heather Mills (11) enters. The two are ejected from the party just as the Greens and Cheryl drive by.

Returning the limo, Larry takes pity on Charlie's wife, whose father just died. "I can't afford a funeral...where are we going to bury him?" she asks. "I think I can help you out" says Larry.

(1) A large coffee table book entitled 'Mondo Freaks,' with photos of various human freaks of nature including a guy who's just a head and a guy with three penises.

(2) Cheryl has the idea to hire a driver for the evening so they can drink at Ted and Mary's party and have fun without having to worry about driving home...

(3) Larry says the bow tie makes him feel uncomfortable and looks like Ted is putting on airs. Ted insists that given the choice of bow tie or no bow tie, the bow tie looks elegant.

(4) Larry claims he once drove a limo and Ted, thinking he's ascertained the root of Larry's fixation with the bartender's attire, demands to know if he had to wear a bow tie. Larry says no, he drove a blind woman and she couldn't see what he was wearing.

(5) Larry tells Susie he loves her outfit. She is wearing a black leather vest with a pink sequined top and headband and pink platform shoes.

(6) "Even your best self, I'm not interested in for eternity... I want peace and quiet." says Susie.

(7) Larry was shy as a kid, as was McEnroe. Larry doesn't understand the exhortation "Don't be shy." McEnroe knows what he means.

(8) Larry believes that ping pong is harder than tennis. "I'll have to respectfully disagree," McEnroe responds.

(10) Larry has sex once a week, maybe twice. McEnroe finds that question too personal to answer.

(11) Paul McCartney's ex-wife has a prosthetic left leg (below the knee) as the result of being hit by a police motorcycle in London in 1993. Cheryl heard she and Paul might be getting back together.