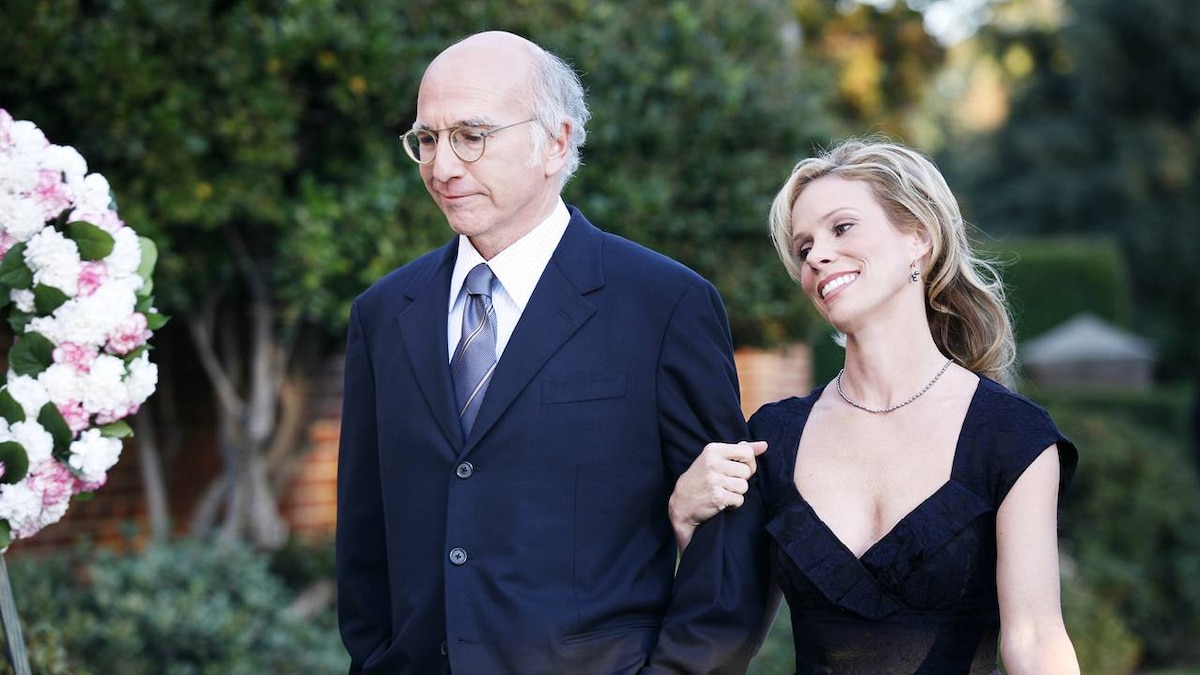 Hanging out at Jeff's, Larry and Jeff discuss the sudden death of Marty Funkhouser's mother, Ida, who was run over in her wheelchair off of Sunset Boulevard. Larry complains that Marty didn't call to thank him for the condolence message he left, and also that he'll never get the $50 owed him because you can't ask a mourner to pay his debt. Susie comes in and gets into an argument with Larry over who owes who a condolence for Ida's death. To break things up, Jeff suggests he and Larry go to the ice cream store.

Waiting their turn in the ice cream line, Larry decides to buy some for Cheryl, explaining it's part of his strategy to get sex (1). With the line taking forever, Larry grows impatient with the sample abuser (2) ahead of them. Jeff decides he shouldn't be eating ice cream and leaves Larry, who confronts the sample abuser and she finally storms out. Leaving the store, Larry bumps into Marty Funkhouser who is out for a jog to work out some of his pent up emotions. When Larry mentions he didn't receive a thank you for his condolence, Marty protests that he was preoccupied — he's an orphan (3) now. Marty remembers that he owes Larry money and pulls out a soggy $50 bill from his running shoe. Larry is disgusted and tries to refuse it but Marty says it's the only money he has, take it or leave it. Larry takes it, grudgingly.

When Larry returns home with ice cream for Cheryl, Loretta is upset he didn't buy any for her family. Larry feels this is an honest mistake on his part — a sin of omission (4). Cheryl isn't impressed with his offering because she's just gotten a call from the private school they're trying to get Daryl and Keisha into, and it turns out the woman Larry argued with at the ice cream shop is the dean of admissions. Larry insists he was in the right — she was breaking the rules of society (5). He promises he'll make things right — he'll get her flowers. When the painter presents Larry with a bill for $50, Larry offers him the Funkhouser fifty. Disgusted, the painter refuses it, settling for the crumpled bills and change Larry offers instead.

When Larry tries to pay for a bouquet of flowers with the Funkhouser fifty, the salesperson refuses it. He calls Marty from his car to complain that no one will take his fifty and demands that Marty bring a replacement to his house. Hanging up, Larry spots the Ida Funkhouser roadside memorial and pulls over. Looking around, he grabs a bouquet of flowers and heads off to the private school.

Dean Julia Thorpe accepts Larry's apology and is pleased with the flowers, which she has her assistant put in a vase on her desk.

On his way home, he stops by the Ida Funkhouser roadside memorial again and picks up a bouquet for Cheryl and one for Loretta. The women are happy for the flowers and Cheryl is impressed that he was able to get back into the Dean's good graces. Larry is feeling like he might get lucky with Cheryl. But then Marty shows up and recognizes the flowers and demands their return. Larry promises to retrieve the bunch he gave to the Dean. Begging Cheryl for some way to get back on her good side, she suggests a bottle of her favorite perfume might do the trick.

Waiting online at the perfume store, Larry grows anxious and tries to second guess which line will move faster, switching back and forth with another man. But the woman in front of him hold things up when she tries different samples, and the man who'd been behind him, moves to the front of the other line and snags the last bottle of Cheryl's favorite perfume. Enraged, Larry causes a scene in the store. He heads back to the school, where Jeff and Susie are meeting with the Dean about Sammi's application. Larry snatches the flowers but can't get out the door before they spot him. Quickly, he stuffs the flowers in an open handbag. It turns out to be Susie's bag and they are all booted out when the Dean discovers her flowers are missing. The Greene's are furious at Larry — now none of the kids can go to the school.

Larry heads to the Funkhouser's with the bedraggled bouquet to return it. Richard Lewis is there paying his respects along with out-of-town friends and family who pounce on a tray of hors d'oeuvres that is passed around. Larry calls them vultures (6) and Richard agrees. He spots a shrine to Ida at the Funkhouser's, including a bottle of Cheryl's favorite perfume and he snatches it when no one's looking.

The next day, at the funeral, Cheryl is happily wearing her new perfume as they stand in line to greet the family. As they draw closer, Marty sniffs the air, smelling his mother's missing perfume. Panicked, Larry tosses the Funkhouser fifty onto the floor in the middle of the room, says "Look somebody dropped a fifty," and as the vultures pounce, he hustles Cheryl away.

(1) In order to get Cheryl to have sex with him, Larry says: "On the day I want sex, I'm a lot nicer….then we'll have sex. Then I'll go back to being the way I am. It's fascinating."

(2) Someone who takes too many free samples. According to Larry, only one or two at the most should be allowed.

(4) According to Larry, a sin of commission is much worse because it is intentional, whereas a sin of omission is unintentional.

(5) Unwritten rules that we have that help us go about our day, according to Larry. e.g. Like at night, we tiptoe, even though there is no sign that says "tiptoe."

(6) "I bet if you threw a quarter down there'd be a stampede," Richard says.