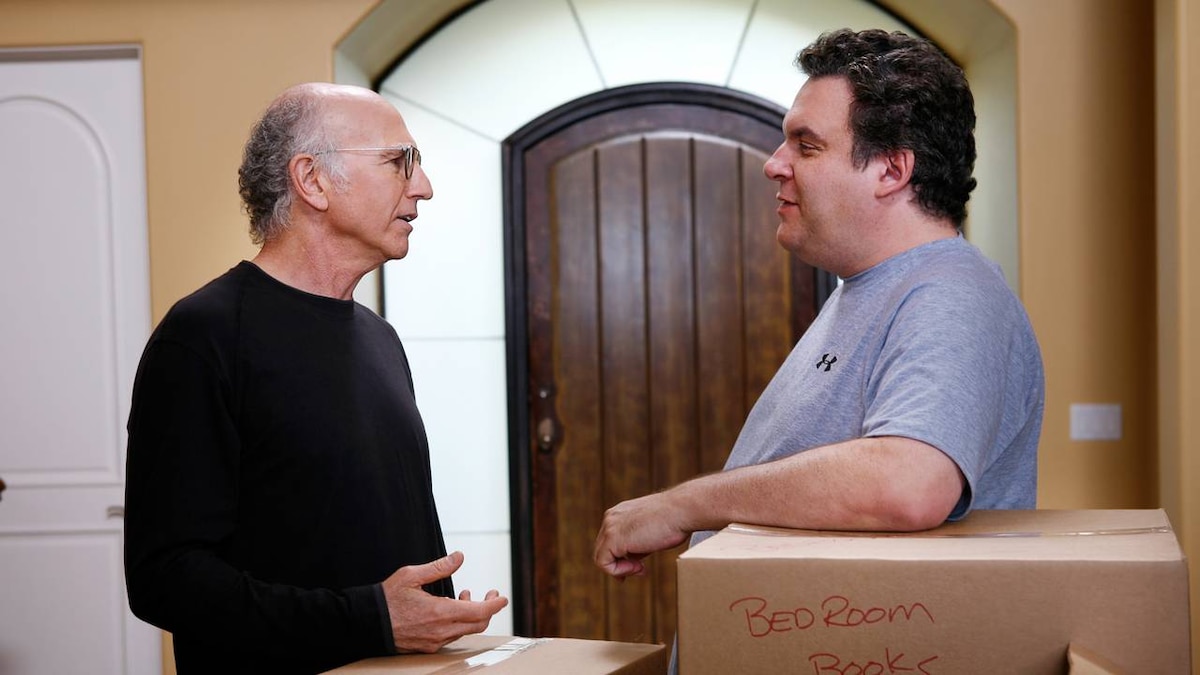 Directed by Robert B. Weide

Jeff is helping Larry, Cheryl and the Blacks unpack in their new house when Cheryl gets a cell phone call. It's Ted and as Cheryl runs off to take the call, Larry complains to Jeff about their flirting, including the Tap (1). Larry reminds Jeff of the NRDC ceremony; Larry's having a wing named after him in honor of a large donation he made. Meanwhile, though the Blacks aren't thrilled with the new house, they've invited Uncle Leon, Loretta's brother (who lives in LA), to stay.

Dropping the blanket off at the dry cleaner, Larry is embarrassed when the drycleaner sees the stain and he assures her it wasn't him. When she gives him his dry cleaning to take home, he notices that his #25 jersey (3) is missing. She shrugs and says she must have given it to someone else by mistake. When he is outraged, she invokes the unwritten law of dry cleaning (4) and tells him what's done is done.

At the NRDC opening, Larry complains about the stain while talking to Jeff and Ted and Jeff confesses that it was actually him. Jeff did it at Passover (5) at Larry's, explaining he got bored but then couldn't clean it up because he had to rush to get back for the 4 questions (6). Meanwhile, when Larry sees that the other wing was donated by "Anonymous," he gets upset. Now it looks like he just did it for the credit. His distress escalates when Cheryl tells him Ted is Anonymous, and, in fact, everyone seems to know this, including Senator Boxer, who's giving the opening remarks. It's faux anonymity (7), Larry insists, fuming. When Larry brings up the dry cleaning issue to Senator Boxer, complaining that there's no regulation of the industry, she tells him that's just the rule of dry cleaning, and that she, in fact is wearing someone else's pants she got from the dry cleaner.

Larry invites Leon out for a drive and apologizes for blaming him for the stain. While they're out, Larry spots an Asian man wearing a #25 Yankees jersey and tells Leon it's his. Leon insists on getting it back and when he demands that the man take off his shirt, the man, intimidated, hands it over. Desperate to use the bathroom, Larry stops by Jeff and Susie's and begs Susie to use the bathroom in spite of the fact he's banned. She acquiesces. Later, Leon and Larry spot another man wearing #25 and Larry realizes the first jersey wasn't his after all. This one, however, worn by a board member of the NRDC, is Larry's — the man admits he got it from the dry cleaner but insists that means it's his now. They argue and the man finally tells Larry he's taking his name off the wing. Larry couldn't be happier. "Put anonymous!" he shouts.

Larry and Leon are home playing cards when Susie busts in, furious because her daughter Sammy has found ejaculate on her teddy bear shortly after Larry's visit. Larry insists it wasn't him. "So it's anonymous?" Susie shouts. Cheryl overhears and tells her that Ted is Anonymous. Susie, shocked, takes off after Ted.

Larry walks down the street in his #25 jersey when the Asian man Leon took the jersey from spots him. This time he's with a group of tough guys and as they chase after Larry, he runs to the NRDC building for safety but the doors are locked and the guard won't let him in. "I'm Larry David. That's my wing!" he begs. But the guard only sees "Anonymous" on the wall.

(1) According to Larry this is "sex for platonic friends." Because touching each other is forbidden, the friends are allowed to playfully tap each other instead.

(3) Joe Pepitone's jersey number from the NY Yankees. Larry has had his #25 jersey since he was a kid.

(4) Sometimes you get something that isn't yours and you keep it, and sometimes something of yours is given to someone else and you lose it.

(5) A Jewish holiday. Not one of the high holy days, such as Yom Kippur. (Jeff insists he would never have masturbated at Larry's during Yom Kippur.)

(6) A popular part of the Passover Seder ceremony in which four questions are asked of the youngest child in attendance. e.g.: Why is this night different from all other nights? And the child responds with set answers.

(7) You're either anonymous, or you're not, according to Larry.

(8) A Yiddish word referring to someone who is a gossip.