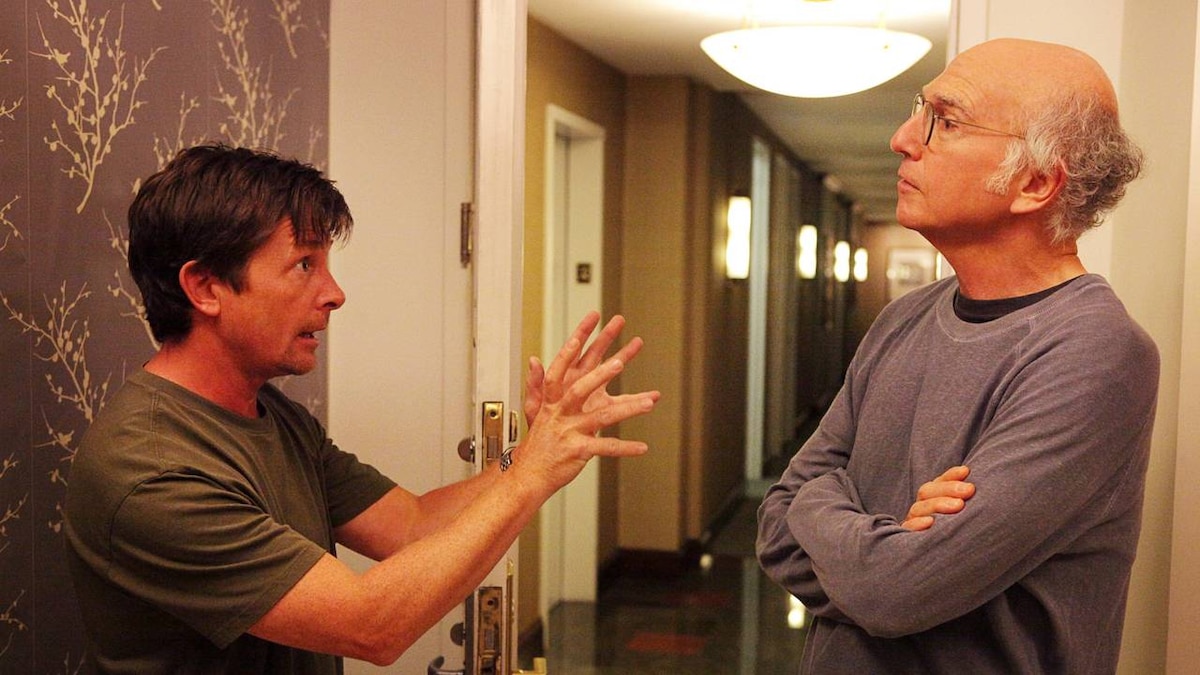 While waiting for his girlfriend Jennifer to get ready, Larry doodles a Hitler mustache and a swastika on a figure in one of her magazines. Her young son Greg arrives and introduces himself to Larry. Greg, who has just come from watching Project Runway and is rather effeminate, loves the design element of the swastika, and asks for one for his birthday.

At the bar, Jennifer plays background piano for the patrons, but Larry insists on shushing everyone who is talking, including Larry's upstairs neighbor Michael J. Fox. Fox shakes his head in Larry's direction as he exits, and Larry wonders if it was a statement or a product of Fox having Parkinson's disease.

Larry goes to Fox's apartment to apologize for shushing him. Telling him not to worry, Fox hands Larry a soda, which explodes all over his clothes when he opens it. Fox says it was shaken because of the Parkinson's. Later that night, Larry and Leon can't sleep as Fox is clomping on the floor in boots. When Larry confronts him, Fox again pins it on the Parkinson's.

For Greg's birthday, Larry brings him a sewing machine. While Greg is thrilled with the gift, Jennifer is not, and accuses Larry of turning her son gay. Susie tells Larry he needs to buy Greg another gift to make it up. The conversation turns to Fox's devotion to his wife and Susie asks Jeff if he'd take a bullet for her. He says he would, but she doesn't believe him.

In the lobby of the apartment building, Larry collides with Fox. As their tensions reach a boil, Fox tells Larry to take it up with the board. He does, and the board puts Larry on probation, recommending he attend Fox's Parkinson's foundation fundraiser to atone.

In the park, Larry brings Greg another gift, a violin. Greg tells Larry how much he loves the sewing machine; he even used it to make a gift for Susie. He hands her a pillow sham embroidered with a swastika, which Greg says Larry taught him how to make. As an enraged Susie confronts Larry she steps into the path of a speeding biker. Jeff throws himself in front of Susie, absorbing the crash. Lying on the floor, he tells his wife, "I took a bullet for you." "It was a bike, technically," Susie responds.

Larry and Jeff attend the fundraiser and get shushed for talking too loudly. Jeff asks what gift Larry got Greg, and in response, Larry mimes playing the violin. On stage, Fox calls out Larry for making the violin gesture during the speech and the crowd is outraged. Mayor Michael Bloomberg, who is in attendance, stands up to the podium and tells Larry he wants him out of the city.

Back at the apartment building, Fox sees Larry and wants to bury the hatchet. He invites Larry to join him in attending an event for sick children. Larry thinks it over, but tells Fox he's going to be out of town that day.

When the day comes, Larry and Leon are walking the streets of Paris. A man pulls his car in between two spots, and arguing in French, Larry calls him a pig parker.