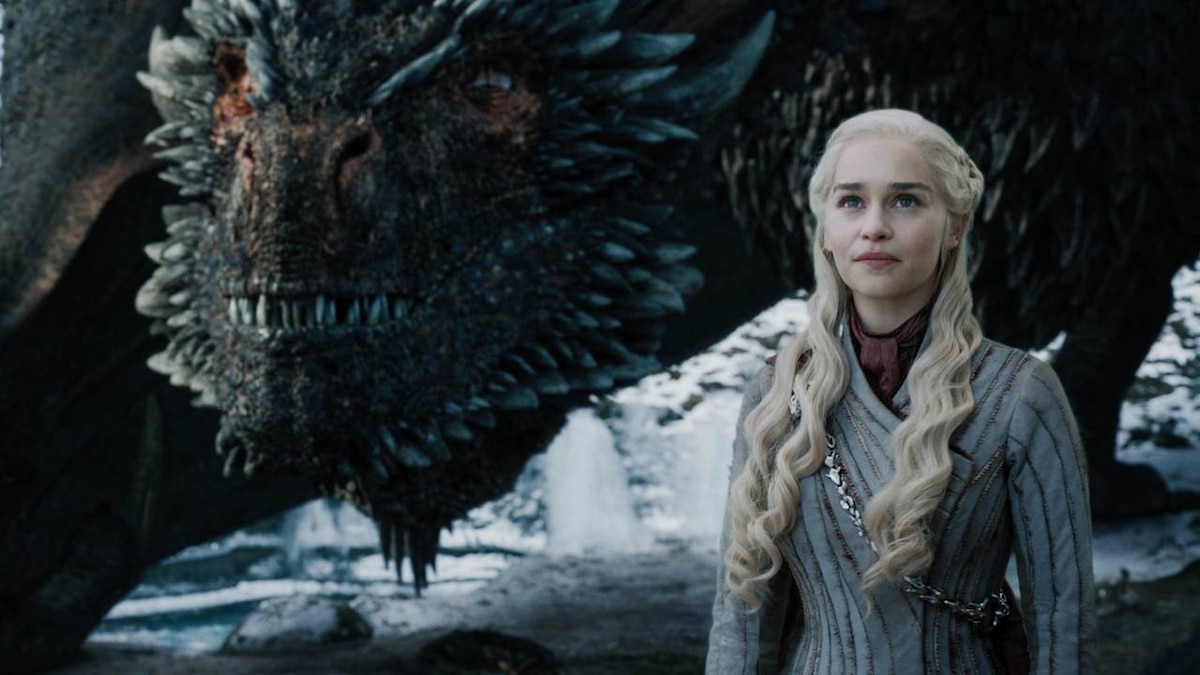 The Last of the Starks

The survivors of the battle at Winterfell mourn those they've lost; the bodies of Jorah, Theon, Beric, Edd, Lyanna Mormont, and countless others rest upon pyres. As part of her tearful goodbye, Sansa places a Stark pin on Theon's chest.

"They were the shields that guarded the realms of men." – Jon Snow

A somber feast follows; the survivors eat and drink in silence. When Daenerys legitimizes Gendry by proclaiming him Lord Baratheon of Storm's End, everyone relaxes into the celebration. Daenerys notes how beloved Jon is by the people of the North. Varys notices her unhappiness.

Emboldened by his favorite drinking game, Tyrion guesses Brienne is a virgin. Embarrassed, she leaves the feast, and a rejected Tormund watches as Jaime follows. The wildling finds comfort with a young Northern woman instead.

Sansa approaches the Hound and the two discuss how she has changed since their time in King's Landing. When Clegane suggests things would have been easier if Sansa had left the city with him when he'd offered, Sansa gently responds she's still be a "little bird" then.

Gendry finds Arya shooting arrows. Thrilled to share his news, he proposes she marry him and become Lady of Storm's End. Arya refuses, reminding him she has never been a lady.

Still tipsy from the drinking game, Jaime stumbles into Brienne's chambers with more wine. The attraction between them undeniable, they sleep together.

Daenerys finds Jon alone in his room. She explains Jorah loved her, but she could never love him the way he wanted – the way she loves Jon. They kiss passionately, but the truth about Jon's lineage comes between them. Daenerys asks him to swear he won't tell anyone, including Arya and Sansa.

"You won't be able to control it or what it does to people. No matter how many times you bend the knee." – Daenerys Targaryen

Daenerys and Jon gather with their counselors to plan their next moves; Cersei's new alliance with the Golden Company, and the losses suffered by Dany's forces have rebalanced the two armies. Tyrion reminds Daenerys of their objective to remove Cersei without destroying King's Landing. He and Jon suggest they give the people the opportunity to reject their queen by preventing resources from reaching the city.

Sansa urges Daenerys to allow the remaining soldiers to rest before they travel south for another fight, but Daenerys sees this as an attempt to renege on their agreement. Jon silences Sansa by siding with Dany.

Plans are made: A small group, including Daenerys and Tyrion, will ride to White Harbor and sail for Dragonstone, while Jon and Davos lead the army down the Kingsroad. Jaime chooses to remain in Winterfell.

"We have won the Great War. Now we will win the last one." – Daenerys Targaryen

Jon, Bran, Sansa and Arya meet in the Godswood. Although she respects Jon's alignment with Daenerys to protect the North, Arya still believes the Dragon Queen isn't trustworthy. Jon argues they should be open to new people, but the Stark sisters are adamant their family is all they need. Jon chooses to let Bran divulge the truth about his parents – but only after Sansa and Arya promise to keep it secret.

The Lannister brothers share a drink and discuss Jaime's decision to stay behind with Brienne. Bronn arrives, ready to kill them both unless they can double Cersei's offer of Riverrun. Tyrion bargains for their lives, promising the sellsword Highgarden, should he allow them to live, and Daenerys wins the war.

"What if there's someone else? Someone better?" – Sansa Stark

The day of departure arrives. Hoping to leave on good terms, Tyrion speaks with Sansa. Still unconvinced about Daenerys, the Lady of Winterfell tells Tyrion about Jon.

The Hound leaves Winterfell alone on horseback but is met along the way by Arya. On the road together again, they ride for King's Landing.

Jon bids his friends farewell. Tormund plans to bring his people back beyond the Wall; Jon, sad he cannot go with them asks the wildling to bring Ghost along. Sam and a pregnant Gilly say their goodbyes to Jon as well.

"The fact is, people are drawn to him." – Varys

The Targaryen ships sail to Dragonstone as Daenerys rides with her dragons above. Below deck, Tyrion tells Varys Jon's secret. Outside, bolts shoot through the air, striking Rhaegal. The dragon falls into the sea. Euron Greyjoy's ship, The Silence, appears with the rest of the Iron Fleet. Daenerys flees to protect her last dragon. Her ships are destroyed, and when the survivors swim to shore, Missandei is not among them.

To shield herself, Cersei opens the Red Keep to the people of King's Landing — should Daenerys destroy the castle, she will murder thousands of innocent people in the process. Euron reports back about his success at sea, and Cersei, passing off Jaime's child as Euron's, rewards him with news of her pregnancy. Missandei is shackled in the corner.

"So much for the Breaker of Chains." – Cersei Lannister

Varys begs Daenerys to temper her anger over Rhaegal's death and Missandei's abduction, so as not play into Cersei's hands. Tyrion argues the same. Daenerys reluctantly agrees to a final meeting with Cersei, acknowledging it may be best the people see she "made every effort to avoid bloodshed." Worrying about the queen's state of mind, the Spider wonders if Jon might be the better fit for the throne – and better for the realm.

"You're a good man and you can't save her." – Brienne of Tarth

Those left at Winterfell hear the news of Euron's ambush on Daenerys' ships. Jaime decides to return to King's Landing, over Brienne's pleas for him to stay.

Daenerys, Grey Worm, Varys and a group of Unsullied position themselves outside King's Landing. Above, Cersei stands with her supporters, and Missandei in chains. Tyrion and Qyburn meet midway, each representing their queens. Tyrion demands Cersei's surrender and the release of Missandei, but Qyburn refuses. Tyrion addresses his sister directly, imploring her to think of her unborn child. Unmoved, Cersei advises Missandei choose her last words. The young woman looks at Grey Worm, then directly at Daenerys before saying, "Dracarys." The Mountain swings his sword, and her body falls to the ground.