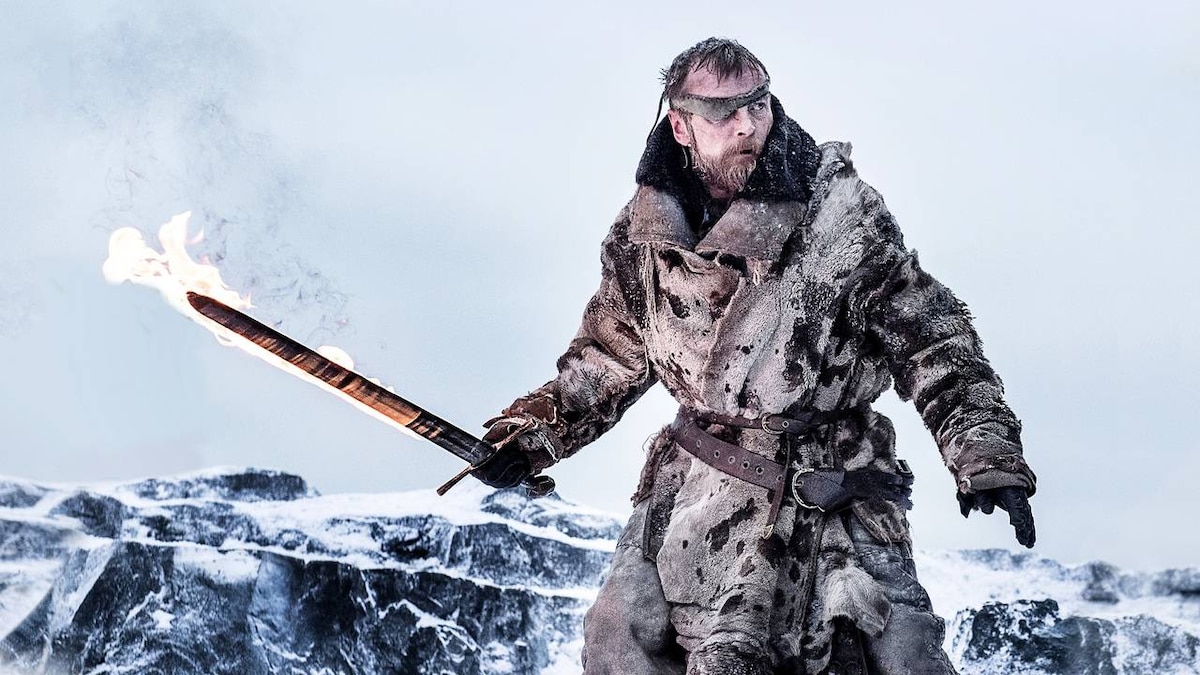 Jon Snow and the others trudge through the snowy landscape beyond the Wall. Jon explains to Tormund that Daenerys won't help unless he bends the knee. Tormund, remembering Mance Rayder's stubbornness, asks, "How many of his people died for his pride?"

Sensing Gendry's resentment, Thoros of Myr and Beric Dondarrion rationalize their past decision to sell the boy to Melisandre: Wars cost money. Gendry's description of his experience -- stripped naked, strapped to a bed, leeches placed on him -- wins him no sympathy. Jon connects with Jorah, relieved when the older man refuses to take back Longclaw.

While the Hound and Tormund share their different perspectives on Brienne of Tarth, Beric catches up to Jon to discuss his resurrection. Jon is frustrated he doesn't know why he was brought back, but Beric posits what matters is knowing what they're fighting for. Jon repeats his old Night's Watch vow, "I am the shield that guards the realms of men" and the two men agree, maybe that's enough. The group stops as the Hound takes in a distinctive mountaintop: the one he saw in the flames.

Daenerys studies a map of the north as Tyrion sits nearby. She tells her Hand she's glad he's not a hero, as heroes -- Drogo, Jorah, Daario, Jon Snow -- do stupid things. Tyrion points out all these men fell in love with the Mother of Dragons, but Daenerys denies Jon has any affection for her. They discuss Cersei, and Tyrion uses the moment to remind Dany that fear alone is not the right weapon; the world she wants to build will take longer than a single lifetime to construct. Daenerys refuses to discuss the line of succession until after the crown is hers.

The small band runs into a heavy blizzard. Tormund glimpses something through the snow, and the men ready themselves for what emerges: a bear with blue eyes. Beric attacks, sword ablaze, but the burning bear continues to charge, and turns on the Hound. He stands frozen in terror, until Thoros intercedes. The bear targets the Red Priest, sinking its jaws into Thoros' shoulder just before Jorah vanquishes it with a dragonglass dagger into its neck. Thoros refuses to return to Eastwatch so Beric cauterizes the wound with his fiery blade. The group soldiers on.

Tormund halts the march; the Army of the Dead moves through a canyon below. The team lights a fire near the mouth of the pass to draw the attention of a White Walker. Jon and the rest of the men spring into action; Jon takes down the Walker with Longclaw. Once the White Walker shatters, several of the wights accompanying him drop as well. The Hound grabs the last remaining wight, but not before it lets out a high-pitched scream. The sound of the massive army on the move is heard in the distance. The group rush to bind their captive wight, placing a sack over its head. Jon instructs Gendry to run back to Eastwatch and send a raven to Daenerys. Faster without his hammer, Gendry reluctantly leaves it behind and sprints south.

The remaining men head to a small island in the middle of an iced-over lake. They tread carefully when the Hound makes a slight crack on the surface. They wights close in but the weight of the army causes the crack to give way, forming a protective moat around the tiny island. Dozens of the dead fall into the water and sink. Safe for the moment, the men prepare for the cold night ahead.

Running to the point of exhaustion, Gendry collapses just outside the Eastwatch gate. Panting for breath, the young man tells Davos to send a raven immediately. Receiving the message at Dragonstone, Tyrion tries to convince Daenerys she cannot fly off on a rescue-mission. Unwilling to simply do nothing again, she sets off for the North.

Arya walks with Sansa through the courtyard at Winterfell, recalling how their father watched her target practice in secret, applauding when she finally hit a bullseye. From that, Arya understood that while against the rules, it was not wrong. "Now he's dead. Killed by the Lannisters. With your help," she says, producing the scroll she found in Littlefinger's chamber. The letter, written by Sansa to Robb, asked him to swear fealty to Joffrey after Ned's arrest. Arya cannot believe Sansa thought the note would help save their father, and reveals she saw Sansa stand with the Lannisters at Ned's execution. Growing defensive, Sansa reminds Arya it is because of her they had a home to return to. Arya, reading her sister, knows Sansa is afraid the Northern lords will abandon her when they learn of the note. She considers returning it to Sansa but walks away instead.

Sansa and Littlefinger discuss the letter. Littlefinger claims not to know where Arya found it, but plays devil's advocate: Arya would never betray Sansa. Sansa counters she might if she thought Jon were at risk. Littlefinger suggests involving Brienne. Maester Wolkan appears with a newly arrived scroll: an invitation to King's Landing.

Not planning to set foot in the capital while Cersei is queen, Sansa tasks Brienne to represent the North. Brienne is concerned about leaving Lady Stark alone with Littlefinger, but cannot sway Sansa from her decision.

Sansa searches Arya's chambers for the letter. Spotting a satchel under the bed, Sansa is horrified to find a collection of faces inside. Arya enters and explains that with the right face she can become anyone she wants -- even the Lady of Winterfell. Arya hands Bran's dagger to her shaken sister and leaves.

Beric attempts to wake Thoros, but realizes his friend has died in the night. Dondarrion says a prayer as they burn the body. Jorah and Jon struggle to understand why eliminating one White Walker caused other wights to drop, surmising a link between the Walker and the wights it turned. On this assumption, Jorah suggests they go for the White Walkers but Jon worries it will jeopardize their captured wight. Knowing the odds are against them, Jon utters, "Daenerys is our only chance." Beric, aware he is now on his last life, suggests another option: Kill the Night King.

The men and wights realize the ice has frozen solid. The army begins to cross towards the small island and a chaotic fight ensues, the wights relentless in their pursuit. The Hound wields Gendry's hammer but realizes a dragonglass dagger is more effective. Tormund is nearly dragged into the water but is saved by the Hound. Still, the men begin to tire, and their wight struggles in its bindings. They fall into a circle formation around it, their situation increasingly bleak.

Overhead, Drogon roars into view with Viserion and Rhaegal behind him. Daenerys quickly takes stock, and guides Drogon to land on the island. The men climb on board the massive dragon but Jon remains on the ground to fight off approaching wights.

Across the shore, a White Walker lieutenant hands a giant ice spear to the Night King. Taking aim, he hurls it skyward, striking Viserion in the throat. Daenerys and Jon both watch as the creature plummets to the earth, crashes into the lake and disappears under the ice. The Night King takes up a second spear, setting his sights on Dany and Drogon. Jon rushes towards Dany, urging her to flee when he is tackled by oncoming wights and falls into the water. Daenerys scans the ice for either Viserion or Jon, but sees neither. She has no choice but to flee.

Jon pulls himself out of the water, and slowly prepares for an unwinnable face-off against the Army of the Dead. Suddenly, a lone rider gallops in, revealing himself as Benjen Stark. He loads his nephew onto his horse, and tells him to, "Ride for the pass." Barely conscious, Jon turns back to see Benjen take on the army himself until he is overwhelmed and disappears.

Daenerys scans the North from the Wall. Knowing she is heartbroken over her loss, Jorah gently advises her it's time to leave. As Daenerys turns away, a horn blasts; a horse approaches the gate, Jon's body slumped in the saddle.

The group return by sea to Dragonstone. Daenerys watches as Davos and Tormund tend to an unconscious Jon. She is struck by the severity of the scars across his torso, but says nothing.

Jon wakes to see Dany sitting by his bedside. He apologizes for what she's lost, but Daenerys insists she's glad she went; she understands the threat now. Her eyes filled with pain, she explains the dragons are the only children she will ever have, and vows to help Jon destroy the Army of the Dead. Jon thanks her, and swears his allegiance to his new queen. The two touch hands, holding on the moment, before Dany leaves to let him rest.

Under the observance of the White Walkers, a crew of wights hoist a huge chain from the frozen lake. Viserion's lifeless body emerges onto the shore. The Night King approaches the lifeless creature, and lays his hand on it. The dragon's eye opens and turns a deep, icy blue.

Season 7 Premiere. Jon Snow organizes the defense of the North. Cersei tries to even the odds. Daenerys comes home.

4.The Spoils of War

Jon and the Brotherhood hunt the dead. Arya confronts Sansa. Tyrion thinks about the future.

7.The Dragon and the Wolf

Season 7 finale. Tyrion tries to save Westeros from itself. Sansa questions loyalties.