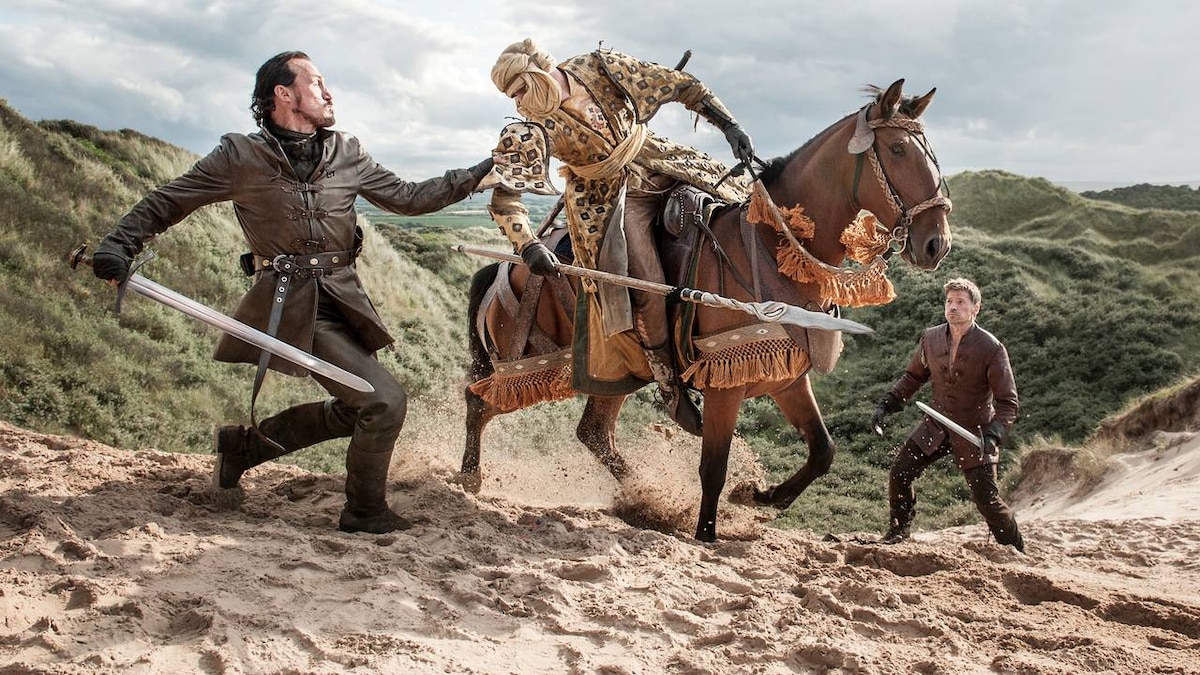 Sons of the Harpy

Jorah Mormont throws a bound Tyrion Lannister aboard a hijacked skiff. Tyrion hums incessantly until Jorah removes his gag. Getting his bearings, Tyrion realizes they're headed east, and learns he's not being taken to Queen Cersei but to Queen Daenerys Targaryen. Sizing up his captor, Tyrion is able to guess his identity – and reveals he knows Jorah spied on Dany. "She found out, didn't she?" he deduces, calling Jorah's plan to offer Tyrion to win back his queen's favor "desperate." Jorah acknowledges Tyrion's cleverness – then hits him in the face.

Newly appointed Master of Coin Mace Tyrell explains to the Small Council that the Iron Bank is calling for repayment – which the crown cannot afford. Cersei sends Mace to Braavos to personally renegotiate the loan's terms and assigns Meryn Trant as his escort.

Ser Barristan Selmy shares a story with Daenerys about how her brother Rhaegar loved to serenade the people of King's Landing. Their moment is interrupted when Hizdahr zo Loraq requests an audience with Dany, begging her to reopen the fighting pits.

The Sons of the Harpy stage attacks all across the city. A group of Unsullied, led by Grey Worm, respond but are trapped and ambushed in a passageway. Barristan Selmy sees the panicked masses evacuating the area and runs into the fighting. The old knight kills several men but ultimately falls. Grey Worm, injured and bleeding, falls on the ground beside him.

Aboard a merchant ship with no Lannister markings, Bronn questions why "one of the most recognizable faces in Westeros" is sailing towards Dorne. "It has to be me," Jaime says. When Bronn asks if Jaime freed Tyrion, the Kingslayer lays the blame on Varys and promises to murder his brother should he ever see him again.

The two men arrive in Dorne and row ashore. Over a snake breakfast, they discuss the ways they want to die; "in the arms of the woman I love," answers Jaime. A group of Dornish riders approach and a fight breaks out. Jaime struggles to hold his own until he gets lucky, blocking a blow with his golden hand long enough for him to finish off the attacker.

Elsewhere in Dorne, Ellaria Sand greets Oberyn Martell's bastard daughters, the Sand Snakes – Tyene, Obara and Nym. As Prince Doran is resolute that they not go to war, Ellaria tells the girls, "We must avenge Oberyn ourselves." Nym notes Jaime Lannister has arrived in Dorne, already aware of the danger Myrcella is in. When Ellaria asks the women to choose sides, Tyene and Nym immediately pledge their allegiance. Obara recalls meeting Oberyn as a child, and abandoning her mother to join him. "I made my choice long ago," she says, burying her spear into the skull of the merchant captain who brought Jaime Lannister to Dorne.

Cersei meets with the High Sparrow and proposes that the crown re-arm the Faith Militant – an army of zealots who dispense the divine justice of the Seven. She sweetens the offer by mentioning that she knows of "a great sinner in our very midst."

Empowered, the Faith Militant takes to the streets to stamp out sin. Soldiers – with Seven-Pointed Stars freshly carved on their foreheads – destroy Littlefinger's brothel, showing particular brutality towards homosexual clients. A group led by Lancel Lannister confronts and jails Loras Tyrell. When Queen Margaery furiously questions a clueless Tommen about his mother's involvement, Tommen promises his wife he will have her brother freed. He approaches Cersei, who dodges any responsibility, and then travels to the Sept of Baelor to speak with the High Sparrow himself. Unwilling to resort to violence, Tommen gives up after the Faith Militant and Sparrows block his access. When he breaks the news to Margaery, she grows cold toward him. "I need to be with my family right now," she tells her husband, and sends word to Olenna.

King Stannis Baratheon watches Jon Snow train recruits in the Castle Black courtyard. Queen Selyse joins him, and laments that she couldn't give Stannis a son, only deformity. Melisandre arrives and assures the queen "those scars mean nothing to the Lord of Light." Reminding Stannis of his defeat at the Blackwater, the priestess confirms she will not be left behind when he marches for Winterfell.

Melisandre enters and appeals to Jon to ride to Winterfell as well. "None of us know the castle as well as you do," she reasons. She undresses and climbs on top of him, but Jon rebuffs her, explaining that he still loves Ygritte. "You know nothing, Jon Snow," Melisandre says as she exits.

Shireen Baratheon greets her father, assuring him she is happy at Castle Black even though she knows her mother did not want her there. "Are you ashamed of me, father?" she asks. Stannis recounts the story of how Shireen contracted greyscale as a child and how he refused to exile her to the ruins of Valyria to live with the Stone Men, instead hiring anyone he could to cure her. "You are the princess Shireen of House Baratheon," he proclaims, "and you are my daughter."

Sansa Stark lights candles in the crypts of Winterfell, discovering a southern feather in front of the statue of her Aunt Lyanna. She will never know who put it there. Finding her in the crypt Lord Baelish tells Sansa about seeing Lyanna as a boy at the tournament at Harrenhal. Rhaegar Targaryen won the tourney and rode past his wife, Elia Martell, and gave Lyanna the victor's crown of roses. "How many tens of thousands had to die because Rhaegar chose your aunt?" Littlefinger muses.

Littlefinger reveals that he's headed for King's Landing to meet Cersei. He assures Sansa that she won't be alone with the Boltons for long – Stannis will soon march on Winterfell. Littlefinger wagers that, with the North behind him, Stannis will most likely take Winterfell and name Sansa, "Wardeness of the North." Even if Stannis doesn't prevail, Littlefinger is confident that Sansa will win over Ramsay and outmaneuver Roose. He kisses her delicately and assures her, "The North will be yours."

1.The Wars To Come

Season 5 Premiere. Tyrion learns of a conspiracy and Jon is caught between two kings.

2.The House of Black and White

4.Sons of the Harpy

Dany makes a difficult decision in Meereen. Jon recruits the help of an unexpected ally. Brienne searches for Sansa.

9.The Dance of Dragons

Stannis confronts a troubling decision. Jon returns to The Wall. Mace visits the Iron Bank. Arya encounters someone from her past.