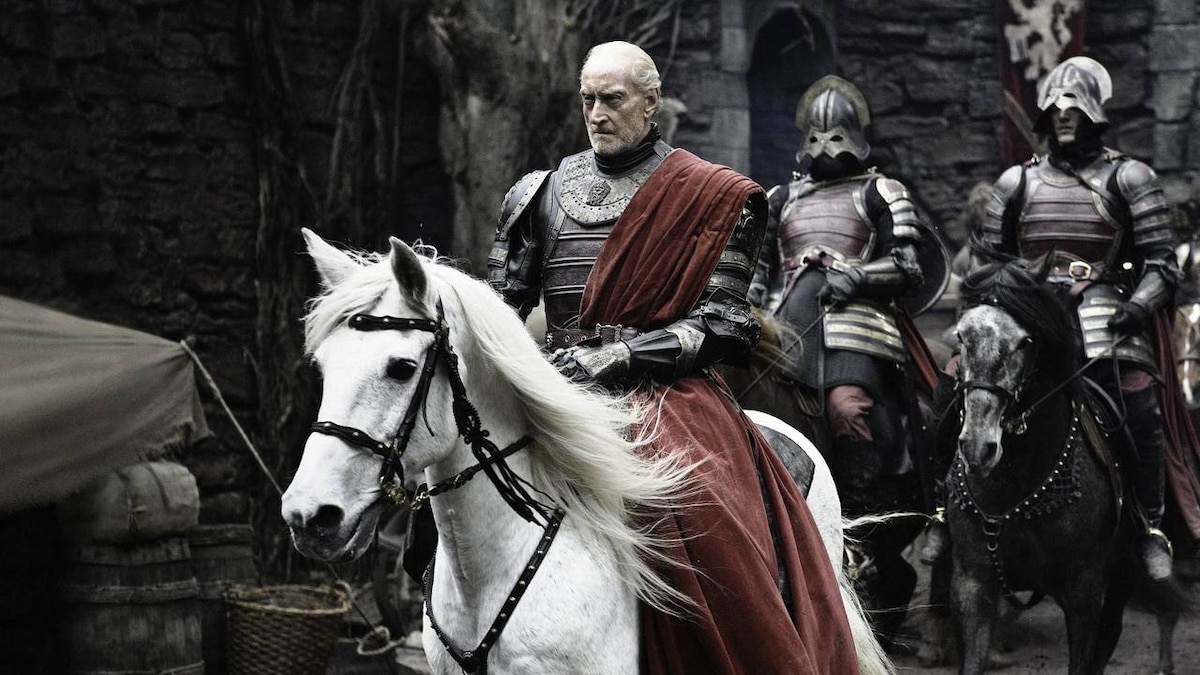 In the Westerlands, two Lannister men stand guard at a war camp and trade jokes. They hear rustling in the woods, but see nothing. Just as they relax, Robb Stark's direwolf, Grey Wind, leaps from the darkness and attacks. The rest of the northern army follows, annihilating the Lannister force.

After daybreak, Robb tours a battlefield littered with dead. His bannerman Roose Bolton tells him: "Five Lannisters dead for every one of ours." The experienced warrior suggests torturing the surviving enemies for information, but Robb won't have the prisoners hurt or killed. "The high road is very pretty," Bolton says, "but you'll have a hard time marching your army down it." The men come across a young woman from Volantis preparing to amputate the leg of a wounded enemy soldier. Admiring her bravery, Robb holds the man down as she treats him, but she challenges Robb to justify the suffering of both sides.

In the throne room of the Red Keep, King Joffrey Baratheon levels a crossbow at Sansa Stark, furious about the latest Lannister defeat. Instead of shooting her, though, he orders Ser Meryn Trant of the Kingsguard to beat the girl in front of everyone. Tyrion Lannister enters the room and, appalled, dresses down his nephew for mistreating his fiancée. When Tyrion tries to loosen up the young king by sending two whores, Ros and Daisy, to his room, Joffrey is irritated by the overture. Instead of enjoying the women's company, he orders Ros to beat Daisy savagely with a scepter. "I want him to find out," Joffrey says of his uncle.

Littlefinger pays a visit to King Renly Baratheon, telling him that there are people in King's Landing who would support him as ruler. Littlefinger also talks with Queen Margaery, and notes she sleeps in a separate tent. "The marriage of a wealthy girl always breeds interest, if nothing else," he says. Margaery takes his insinuation with a dismissive smile, but she makes it clear: "My husband is my king, and my king is my husband." Finally, the emissary meets with Lady Catelyn Stark, who is so enraged to see the man who betrayed her husband that she draws a dagger on him. One question is enough to calm her: "Do you want to see your girls again?" He assures her both Sansa and Arya are safe, and as a show of "good faith" he returns the remains of Lord Ned Stark.

In the Red Waste, Daenerys Targaryen's rider Kovarro returns on a horse given to him in the city of Qarth. Ser Jorah Mormont warns Dany that the area outside the city's gates is known as the Garden of Bones - and if the gates don't open for her, their bodies will add to the garden. With little other choice, she takes her khalasar to Qarth, where the city's rulers, known as the Thirteen, meet the Dothraki outside the walls. The wealthy merchant leaders ask to see her dragons, but she does not reveal them. At that, the Thirteen turn their backs - except for one man, Xaro Xhoan Daxos. He opens his palm with a dagger, swearing to vouch for Dany and her people. The gates open.

Arya Stark, Gendry and a group of other prisoners arrive at Harrenhal in chains, taking in the horror of the melted castle. The screams of a tortured man echo off the walls, and after he dies, a captive woman tells them that the Lannisters question and kill a person every day. That night as rain falls, Arya repeats the names of everyone she wants to kill.

Arya watches as the Mountain chooses his latest victim. He is strapped to a chair as a man called the Tickler asks him questions about the king's enemies. "I don't know," the prisoner answers as a bucket with a rat inside is strapped to his chest. Another man holds a torch to the bucket, and as the Tickler repeats his questions, the rodent scrambles to escape the flames and chews its way into the man's body. That night, Arya adds the Mountain to her vengeful prayer.

Catelyn meets with King Stannis Baratheon and King Renly Baratheon to convince them to set aside their conflicts and unite against a common enemy. But neither man is interested in compromise. "The Iron Throne is mine by right," Stannis says. He offers his brother a council seat and the position of his heir - if he surrenders before dawn. But Renly is resolute: "No one wants you for their king."

At Harrenhal, Gendry is selected for "questioning" and strapped to the Tickler's chair. Just as the bucket is attached to his chest, Lord Tywin Lannister rides into the castle. "Are we so well-manned that we can afford to discard able young bodies and skilled laborers?" he asks. Tywin notices Arya - but does not recognize her - and asks why she's dressed as a boy. "Safer to travel, my lord," she tells him. Tywin is impressed with her smart thinking and decides to make her his cup-bearer.

Stannis calls for Davos and asks his trusted advisor to undertake a mission for him: Sneak Melisandre ashore. When they arrive, the red priestess leads him into a cave and takes off her robe. Impossibly, she is in the last stage of pregnancy, and as the smuggler's lantern glows brighter and brighter, she gives birth to a shadowy being the size and shape of a man.