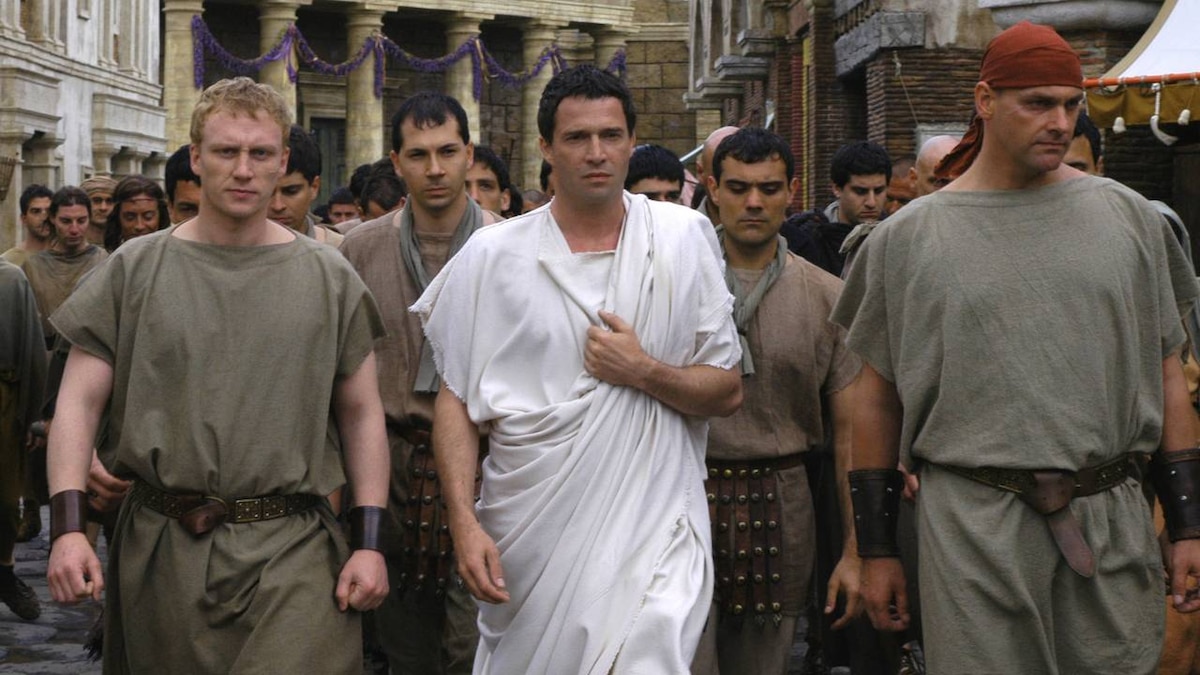 How Titus Pullo Brought Down the Republic

After anointing Mark Antony the People's Tribune, Caesar sends him to Rome to negotiate a compromise with the Senate. Accompanied by young Octavian and his liberators, Vorenus and Pullo, the new "protector of the people" is greeted by cheers as he enters the city, a crowd swarming around him to catch the coins he tosses to them.

Observing the homecoming from across the Forum, Pompey and Cato try to reassure themselves. "We still have the Senate, the army and the men of substance," Pompey says, casting a nervous eye towards the spectacle.

When Vorenus and Pullo return Octavian to a grateful Atia, they are invited to dine with the family "as equals," but only after the young boy explains to his mother that the men ride with Caesar's standard. Several goblets of wine later, Vorenus makes it known that he is a strict traditionalist who believes in "the divinity of the Republic," even if it means siding with Cato and the nobility. It is Octavian, a member of the nobility, who appears to agitate for change - much to his mother's surprise. "The Roman people are suffering," he declares in a burst of sudden passion. "Nobles have taken all the farmland, leaving the streets full of the homeless and starving." Pullo, for his part, is all for Caesar marching on Rome and squashing Pompey and his supporters "with elephants," if necessary. "Never mind the law. Rome needs a strong man with a new broom."

At the end of the feast, the two men eagerly depart for their long-awaited homecomings, Vorenus to his family and Pullo to the brothels. When Vorenus finally comes upon his wife, Niobe, she is holding a small infant, sending him into a rage. Reeling from shock that her husband is alive, Niobe manages to defend herself. "This baby is your grandson," she says indignantly, before leading him to their two young daughters, 13 and 8, who recoil at the site of their estranged father.

After staving off sleep during the rituals of his official anointment by the Roman priests, Mark Antony finds Pompey and his men, greeting them irreverently before offering Caesar's terms: to avoid bloodshed, he wishes to command a single legion provence, in exchange for immunity from a Senate war tribunal.

Offended (as Caesar had hoped), Pompey explains he is interested only in the General's resignation and banishment, punishment for "fomenting a tyranny" and embarking on "illegal warfare, theft, murder and treason," as Cato puts it, fiercely indicting the man.

"And what shall be your punishment, Pompey?" Mark Antony responds. "For betraying a friend, for deserting the cause of the people, for allying yourself with these so-called noblemen?"

With this the negotiations are over. Pullo's first mission does not go so well either. Finding his way into an ex-Gladiator's bar deep in Pompeian territory, he gambles away his spoils, until he discovers that his opponent has been cheating, and thrusts a sword through his throat. He fights his way out of the bar and the neighborhood single-handedly - albeit not without sustaining a few deep wounds of his own - and manages to find Vorenus's home. The next day, a doctor extracts shards from his brain before nailing a metal plate onto his damaged skull.

Vorenus has not fared much better during his own homecoming. After threatening his daughter's young suitor, the boy who "seeded" his grandson, his wife becomes enraged. Later he overhears her lamenting how long she wept for him during his absence, only to have him return a cold, mean brute.

Back among the ruling class, Pompey is busy preparing an ultimatum that would strip Caesar of his power -- or else declare him an enemy of the Senate and the people of Rome. Fearful that war will break out, Cicero refuses to endorse the order. Pompey responds with a threat: if Cicero does not support him, he will take his legions and sail for Hispania, leaving Cicero and his men defenseless - even if it means delivering the city to Caesar.

Once in the Senate, Cicero reluctantly stands in support of Pompey in favor of his motion, and his many supporters follow, despite attempts by some of Caesar's supporters to stop them. Pandemonium ensues as the senators yell back and forth madly. Outside, mobs start chanting Caesar's name, until they force their way through the doors of the chambers. Confused by the chaos, Antony seems paralyzed. It is Cicero who urges him to action, realizing what he has started: "Stand up! Veto the motion!"

By the time he does, the entire Senate is engulfed in a chaotic brawl, and no one hears Antony's veto.

After the riot ends, Pompey makes known his strategy: Mark Antony must be allowed to veto the motion in the ensuing session, lest Caesar is declared a traitor, and has no choice but to oppose him openly in a civil war. Despite his orders, Pompey's foot soldiers swarm Antony and his men as they attempt to leave the Forum the following day. With tensions mounting, a crazed man breaks from the crowd - the ex-Gladiator from Pullo's ill-fated gambling spree - and charges his foe with a sword. Pullo reacts quickly, nearly lopping off the madman's head. A melee quickly ensues, as Pompey's mobs attack the small procession as they try to flee the city, knocking Vorenus unconscious, slashing Mark Antony, and killing several members of the procession.

When word of the events travels to Caesar, he prepares his soldiers. "I am declared an enemy of Rome...They have declared, in effect, that all of you also, are criminals...We have made mighty nations kneel. We have unhorsed a hundred kings and made them our slaves for the glory of Rome. And these are crimes?"

Mark Antony and his bloodied men arrive at Caesar's camp soon after, Vorenus still unconscious, and Caesar seizes the opportunity to rouse his men. "Our beloved Republic is in the hands of madmen! This is a dark day, and I stand at a fork in the road. I can abide the law and surrender my arms to the Senate - and watch the Republic fall to tyranny and chaos. Or, I can go home with my sword in hand and run those maniacs to the Tarpean Rock!"

The soldiers respond with a thundering roar of allegiance.

The next time Vorenus awakes, he is in a traveling medic's wagon, in the middle of a long procession of soldiers, crossing a river. It is Pullo who explains they are heading back to Rome, that he is now "a rebel whether you like it or not."

As the bandaged Vorenus erupts in anger, Pullo tries to assuage him. "Pompey did try to kill Antony, after all. Caesar can't well leave that alone, can he?"

Vorenus calls his bluff, reminding him they both know it was Pullo who was being attacked. But he swears he will not speak of the truth again. As Rome prepares for war, Atia is frantic about leaving the city, while across town Niobe remains calm. Gathering the baby from her older daughter Vorena, she pulls out a breast, and begins feeding the small infant.